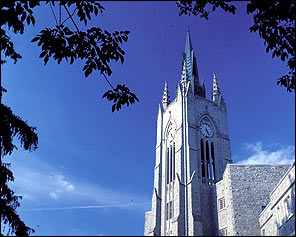 When it comes to determining the top places for living out your golden years, 10 Canadian communities rank with the cream of the crop in the United States, even if you take our colder climate into consideration. That's the somewhat surprising conclusion of Retire in Style: 60 Outstanding Places Across the U.S.A. and Canada, by Warren Bland, professor emeritus of geography at the Northridge campus of California State University.

Born in Canada and raised in southern Ontario, Bland insists he didn't give his homeland an edge. Instead, he used a set of 12 criteria retirees should consider, including landscape, climate, cost of living, transportation, crime and health care. For each category, he awarded a score (out of five). Still, Bland acknowledges retirees might want to emphasize certain criteria, since "everyone has his own combination of needs and wants."

There are compelling reasons for retirees to stay put, but Bland says there is much to recommend about relocating. Retirement represents "a new phase in your life," so moving offers a chance for different experiences and friends. There's also the opportunity for retirees to sell their home and move to where housing is cheaper. And it's possible to find pleasant, affordable places to live if you think beyond the typical places people retire. Pittsburgh, for example, scores high on Bland's list, but is off the radar as a retirement location. The Georgian Bay town of Owen Sound isn't on the beaten retirement track — with a snowy climate and less-than-ideal transportation links — but it offers a great, affordable quality of life.

Before relocating, Bland says retirees should "visit for a week or two during different times of the year." He recently retired himself, settling in Portland, Ore. "We looked for a house in Ithaca, N.Y., but it's a small town. It was harder than I thought it would be to find a home we liked." So Bland and his wife, Sarah, moved on to Plan B, charmed by the quality of life in his new community, "the best Canadian city in the United States."

City (points are in brackets)

Ready to buy or sell?
Whether you are considering buying your first home, or upgrading to your next, we can help you.